"Alexander the Crochet Rabbit and what is your favourite Beatles song? Mine is Hey Jude"

I have a long awaited project to share now that it has been gifted to the new owner.

Meet Alexander the rabbit.  Alexander is the first ever crochet doll I have made up. His pattern is in the March 2014 issue of Homespun. I think I must have made each piece at least twice just to make sure it was right. I couldn't get my head around the instructions for the head and gave that to my Mum to try, even she had trouble and ended up making up the last few rows. I plan to attempt another crochet animal/doll to get used to reading instructions instead of following a graph. 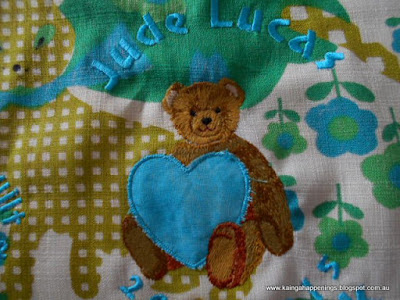 Now you maybe wondering who the new owner of Alexander the Rabbit is. Our second Grandson  Jude Lucas arrived by "C" Section at 9.00 am on Thursday 20th August 2015. Parents Ainsley and Julian and Jacob are now all at home and enjoying the wonders of another baby in the home.Jude is also the owner of the Chicken quilt I completed not long ago. 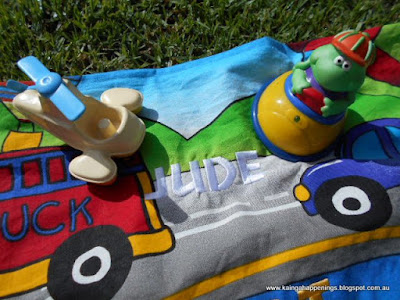 If anyone was super observant they may have seen Jude's name peeking out from underneath the toys on the play rug. We knew Jude was going to be a boy when Ainsley let it slip not long ago and Julian had done the same thing months ago. When Lucy was visiting a few weeks back Ainsley let the name slip out when she was talking to Jacob so I put Jude's name on the rug, if it was wrong I would have appliqued something over it.

So I can say that "Hey Jude" by the Beatles is my favourite song. What is yours?

Oh and Alexander the rabbit is named because they were originally going to use Alexander as a second name but Jacob has Alisdair as a middle name and that would make two children with the same initials. Now I have to remember to make sure I use the right name for the right person with three of the family beginning with J I am sure someone will answer me.

How exciting to have a sweet little new family member. Congratulations to everyone and welcome to the world, Jude. It's my favourite Beatles song too.

Cute rabbit.....congrats on your new grandson....

Oh congratulations Bev - thats wonderful news & I love the name they have chosen. Your rabbit is just gorgeous. How lovely to make personalised gifts for your grandsons. Jacob & Jude ... just perfect :-)

Congratulations on your new grandson! Lovely name!
Such a cute Rabbit you've made too.

Congratulations on the arrival of your new grandson, Bev. Your rabbit is just lovely.

Congratulations on the new grandchild and what a lovely gift. Alexander will be much loved. xx Oh and it has to be 'Here comes the Sun'!

Welcome to Jude... just lovely and your rabbit is just wonderful as is Judes' quilt.... how special
Hugz

As for the Beatles, I fear I'm the only person ever to really not like them at all, so no I don't have a fave song of theirs!