"Friday Night With Friends, It is all very green."

Last night I joined in Friday Night with Friends kindly hosted by Cherryl. There were 33 people stitching up a storm. During the day I made up 5 fruit and veg bags from some green tulle. 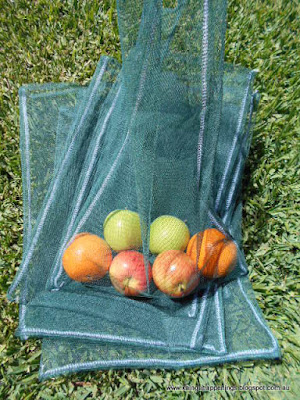 We use calico/green bags for our shopping but I was annoyed with having to use plastic for some of the fruit and veg. I noticed one day while waiting to be served at Coles that the plastic shopping bags come from Indonesia. Indonesia has recently decided to ban plastic shopping bags. It makes no sense that we use bags from a country miles away which has banned them. These tulle bags will get a work out once a fortnight because for the past year we have shopped at Farmer's Markets for our fruit and veg. 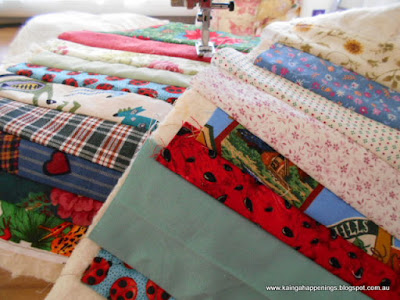 There was a little pile of strips left over from a previous project sitting in the sewing room waiting to be dealt with. I joined some wadding together as well. 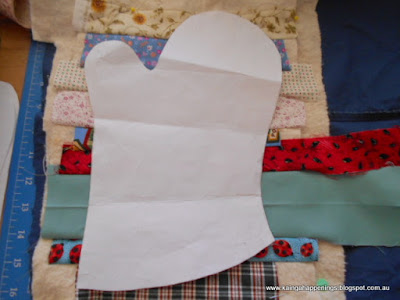 Today I had more time for sewing and finished the potholder. The blue fabric on the bottom is from a pair of jeans that belonged to David. He recently wanted to cut them up to make them into shorts. I kept the fabric for "Later On". Today was the day to use it for the lining. 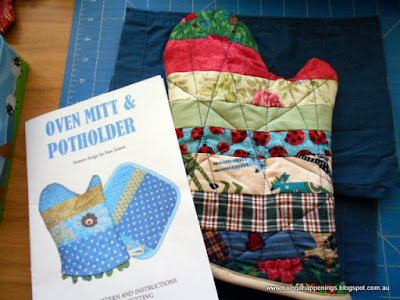 Not bad for a project that cost nothing to make but will be so useful. I have a few more pairs of cut off jeans so I guess I will make some more potholders.

If you joined in Friday Night With Friends I hope you got lots done.

Enjoy the rest of the weekend.

Bather's Beach, Fairstar and The Raw Kitchen, it is all about Fremantle."

Yesterday we had the best day out. We traveled down to Perth on the train and then caught another train to get to our final destination Fremantle.
The first thing we did was find the local tourist bureau because we needed a recommendation for a vegan cafe for breakfast. A place called Roots and Greens was recommended and  found to have what we needed. After spending some time enjoying our meal and people watching in the sun it was time to explore.

First stop was going along the esplanade and fishing boat harbour area then we stopped at Bathers Beach for a while. We don't get to see the ocean where we live so this scene was a big change to our usual outlook.


Of course we had to take a selfie at the beach. After this we had a look through the Round House which used to be a goal. Thank heavens we weren't around back when this was in use. There was a set of stocks inside the courtyard which kept prisoners contained for quite a long time and even nailed there ears to board so their head wouldn't move when people were throwing things at them. Can you imagine that happening in a first world country today.

Then it was time to visit the Western Australian Maritime Museum at Victoria Quay. We hadn't been here before and I was totally in awe of this building. Just outside are walls and walls of  names of people who came to Western Australia as part of the migration schemes that the Government ran in the past.We soon realised that Ian's name would be on one of those walls. After looking for ages we gave up and went inside and found a book with all the listings and were even able to purchase a print of the Fairstar the ship that he and his family came out on in 1965. On one of the museum's levels we even found some items from the ship. A real bonus to the day out. If we had more time we would have taken a tour of the submarine that was there. You don't realise how huge these are. The Museum was certainly worth a visit because there was so much variety and learnt so much.


Then it was time to catch a CAT bus straight to where we wanted to have lunch, The Raw Kitchen. I have heard absolutely wonderful reviews about this place. We were certainly not disappointed at all. It is my type of place to eat, lots of fresh vegies. The decor is right up my alley too. Lots of recycled furniture and quirky bits and pieces. It also has some amazing staff, no need to write down your order, they remembered it all.


We decided to share some plates. First was the Pesto Pasta, which was so bloody good! This would have had to have been our dish of the day.


Pizza had to be on the menu so we chose the Caponata Pizza, this was finger licking good. I truly mean finger licking because we spent so much time licking our fingers while eating this. (in a good way.)


Now I don't normally eat chips or wedges but these seasoned potato wedges were to die for. I even called into a health food shop later in the day to get some Sumac to make some at home.


For drinks Ian chose a Ginger Beer which was so gingery and refreshing and Lucy and I shared a Peruvian Caramel Smoothie. This was so filling and delicious. I don't think we could have had a whole one each.


Seeing we had gone such a long way to visit we couldn't leave without trying the desert menu. I chose the Mint Choc Ice ream, this was like eating fresh mint, something which I love. Ian chose the Caramel slice and Lucy chose Cherry Ripe, both so yummy.Now a few family members have Birthday's this month so we have decided to take them there for lunch. I am so sure they won't be disappointed.

All in all it was a great day though rather long as we caught the train at 6.30 am and arrived back home at 7.30 pm.

We had a great start to Autumn, did you get up to anything special on the first day of Autumn? I would love to hear about it.