The last bit of sewing and Cucumber growing.

Earlier on in the week I finished the last of the sewing for the year. I have had some waffle fabric scraps which have been waiting to be used. I turned them into hand towels. 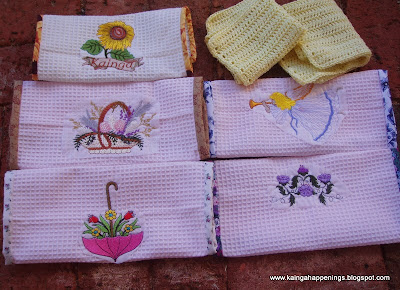 I used fabric for the binding that matched the machine embroidery designs. The white fabric you can see on the stitching is a wash-away. This melts  in water. I also used up the last of the yellow cotton and crocheted two facecloths which are so lovely and soft. 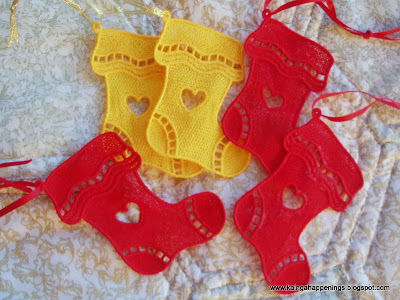 Each of the ladies at the Blogger's lunch received a machine embroidery stocking to hang on the tree.

For many years we just haven't been able to grow Cucumbers. We would plant them and within a day or so there was absolutely nothing left of them. This was our final time at trying. The lady at the Garden Centre suggested that maybe something might be eating them so we put some of those blue snail pallets around the seedlings. Slater's were the little pests eating at the plants.


Leading on from that success I was given several packets of seeds last month and amongst them was a packet of Marketmore Cucumbers. I planted these in those little jiffy pots and all the seeds grew. These have been planted out in a raised bed and are thriving. I have had them under some shade cloth. They even survived several 45/46 degrees days with no side effects.

I enjoy watching Gardening Australia on television and was quite impressed with the self watering vegie box they had on a short while ago. Basically you get a foam box then place either gravel or perlite in the base about half way up the box. Then you add some way to add the water. You can use the black drainage pipe with the holes. We didn't have any of that and substituted the white down pipe with holes drilled in it. A piece of shade cloth is put across the box on top of the perlite/gravel then potting mix is added. Put a hole in the side of the box at the end where the pipe is a couple of inches from the base to allow water to drain out. Fill the pipe up with water to soak everything. This will remain damp for about a week. You are supposed to cut of the shade cloth but we left ours to put across the top of the plants on a hot day. I originally planted the cucumber seeds on one side to see how it worked and was pleasantly surprised with the growth. So a punnet of lettuce was added. I will transplant the cucumbers shortly.We actually have used two foam boxes, the outside bigger box was broken at one end so we placed the smaller one inside. This may help stabilise the temperature for growing  and help with holding the water for longer.

I would like to take this opportunity to wish everyone a Merry Christmas and all the best for 2014. I 'll take a bit of break from blogging over this period and will be back next year.Stay safe.

Hi Bev boy you sure have been busy love your hand towels,such a clever idea.Your little xmas stockings are very cute also what lovely gifts to give your friends.
Thats what happened to our cucumbers this year,they disappeared,lol.
Merry xmas to you and your family Bev and wishing you all a safe and happy new year.xx

Love your hand towels Bev..so pretty.
I love my little red stocking, it looks lovely hanging on my tree... Thank you
Have a wonderful Christmas, and enjoy the break.
Stay safe.

Your hand towels and embroidered stockings are wonderful. Such beautiful work.
Good luck with the cucumbers and thanks for explaining how the watering worked.
Merry Christmas to you, too.

Beautiful hand towels and face washers.
I watched that wash away in action this week...amazing!
Cute little stockings too :o)

They are lovely handtowels Bev. Merry Christmas and wishing you a wonderful 2014.

lovely sewing.... I have just recently been given some waffle cloth and was wondering what to do... you have helped me decide! great to see the veges growing... I have a few squash seeds in only....
Hugz and HAPPY CHRISTMAS...x

I love those tea towels. You are going to love having those cucumbers and home-grown lettuce.

Those little hand towels are just gorgeous Bev, I love how you have decorated them & also the bindings you have used. I am rather partial to Waffle Cloth. So glad you are having success with your cucumbers at last - I grew mine this year in 2 motorbike tyres & they are doing really well - just picked the first 4 yesterday :-) Hope you & your family have a wonderful festive season Bev, I do so enjoy my visits to your blog x0x

Hello Bev,
Great projects. I saw some of that waffle cloth and I I was wondering what one would do with it. Now I know. Love them. I will buy some and play with it. So happy to hear about your cucumbers. I will cross my fingers and hope you have many.
Have a wonderful Christmas to you and your family.
Blessings,
Bobbie Lynn

Bev, LOVE the projects pictured! You are a productive lady, for sure! I hope you have a good blog break, Merry Christmas, and a very Happy New Year. Once this blog bingo game is over my daughter is running, I think we'll take a break, too. See you in January!

Dear Bev, I will wish you and your lovely family a great Christmas time. Over here it's now christmas weather a view days a lot of rain. But we have a nice time with each other. Your christmas socks are so nice the red wan's are so lovely, lots of love from a wet Holland. Greetings Petra.

Hi Bev, your last creations are beautiful and it's lovely seeing your gardening thriving. Wishing you a wonderful Christmas too, Wendy xx

Happy New Year. I'm looking forward to another year of seeing all your wonderful sewing. Hugs