"No sewing, doing this instead."

After sitting watching hours of tennis and no crafting during January I decided the other day we should get out and about. 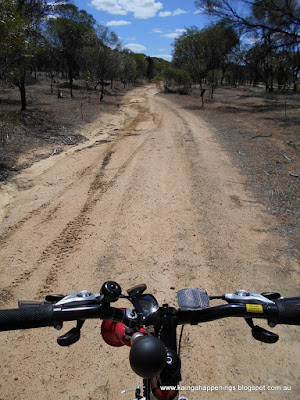 We drove just a few Km's out of town to a  Trail. It was very sandy in parts which was tough going as we hadn't ridden our bikes since Spring last year. 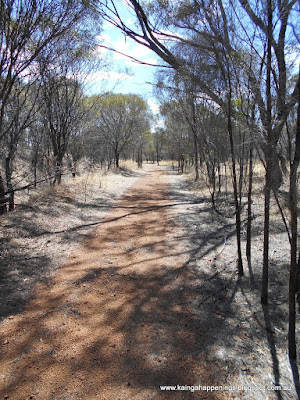 A fair bit of the track was gravel which made up for the sandy bits. This bit was like going through a woods. 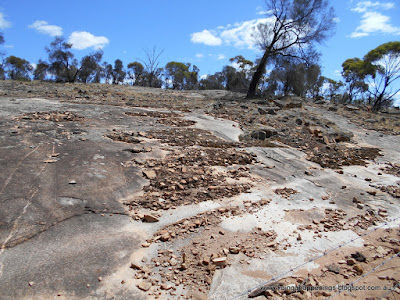 There was a huge rock formation. I wished we had been there a day or so before because we have had some rain recently it would have been lovely to watch the rain coming off the rocks. 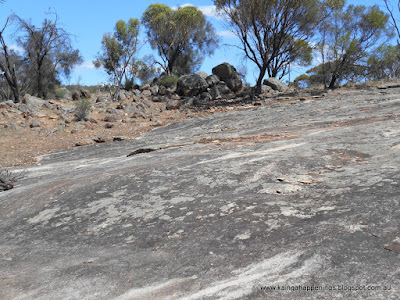 We rode quite a way but came back via the main road, boy was that a lot quicker.

This is so much nicer than going to a Gym, the peace and quite was soul boosting. The only noises we heard was one cow mooing and some birds chirping.

What have you been doing since the start of February ?

Great way to exercise and enjoy the countryside.

Boy what a ride! Well done.

I too have been watching the tennis amongst other happenings. I loved the result of the women's but the men was unfortunately rather predictable. What a lovely trail to ride a bike. As you say so much better than cycling in one spot adnauseum, amongst other sweaty bodies in a gymn.

That would have been quite a workout but as you say, so much nicer out in nature. Thanks for sharing your little journey xx

Lovely ride. Better to be out there in the fresh air, than in the gym..
May be too hot in the coming few days for a ride like that again...good sewing time .

Hi Bev, Good exercise for you I'm sure! I've not been doing much since Christmas...mostly staying inside out of the cold and snow here where we are. Wish i could get some sewing done, but my machine isn't set up right now. I do have a trip in the works to go see my daughter so that should help the winter pass. Thanks for your post.

well done you..... looks like a wonderful ride
Hugz

Looks wonderful! One of my favorite things to do - bike through the wilderness. Enjoy!

How were the legs are your ride Bev? What a lovely way to spend the day.

Great way to exercise and enjoy the outdoors :-)

Thanks for the trip fellow FNWF crafter. The landscape is so different from here, so I really enjoyed your photos.

Our physical exercise has been coming in the form of endless snow shoveling. We pull on our boots and walk our meadow trail if we can get through the snow drifts. We walk out to visit the chickens several times a day and walk to the mailbox out on the road.
I set up my ironing board in a different room than where I am sewing so I have to get up and walk to iron constantly as I construct my quilt blocks.
Living in a multi level house I hike the stairs several times each day going about my house jobs.
Even so, I know I'm sorely out of shape for the coming gardening season.
Biking sounds marvelous. I am a tad envious.
Love your photo tour.

Looks like a lovely way to flex those muscles on a leisurely ride.
Lovely crochet finishes too Bev

Great place to bike ride!! I enjoy getting out on my bike from time to time to, but I ride by the sea!! Only on non windy days though! ! Lol!!