" Machine Embroidered Owls,Gingerbread Man and Needle Holder all done in the hoop."

Last week I had a wonderful time in the sewing room playing with some patterns that I downloaded from a site called Cute Embroidery. 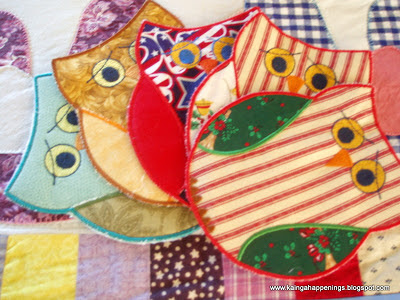 First up are some Owl Mug Mats that were done in the hoop. By this I mean the stabiliser was loaded up in the hoop and the owl was sewn on top of the stabiliser. The one on the far left was the one I did first. This will be used as a mat for a teapot or hot item as I used heat proof wadding in this one. I did forget to change the bobbin thread when I was sewing the outside satin stitch but this really didn't make that much difference. For all the fabrics I chose I ironed some lightweight interfacing onto the back to help stabilise them and some of the mats had some thick interfacing put in them as well. 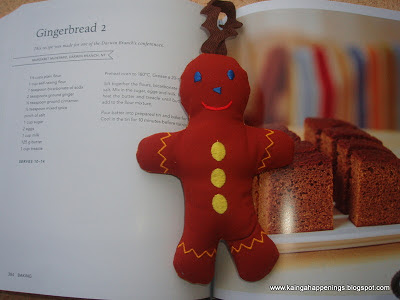 This Gingerbread Man was also done in the hoop. I only needed to turn him out the right way and stuff him and sew up one side by hand. He is currently hanging on the pantry door and looks like he is loving his new found place in the home. 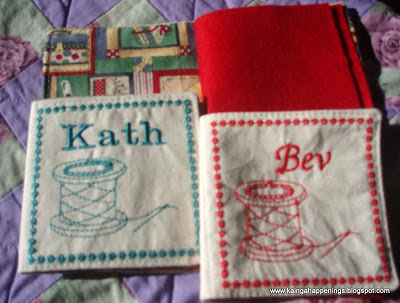 I made up three of this design. Needle holders always come in handy. This design only had to be trimmed at the corners then turned out the right way after sewing was completed in the hoop. The gap was hand sewn and then a row of stitching around the edge and some felt in the middle completed the holders. 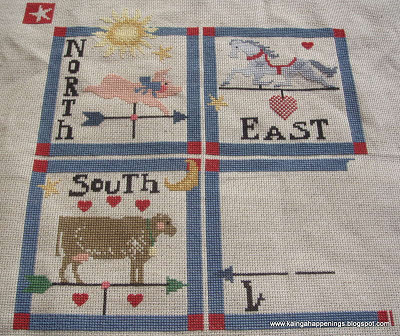 The "South" block is nearly completed on the cross stitch, as with the other blocks there are some decorative stitches that need doing at the end. 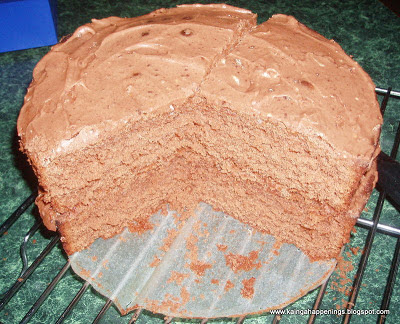 We no longer have a teenager. Lucy celebrated her 20th Birthday over the weekend. Actually it went for three days as the family couldn't be all together at once. I would also like to take the opportunity to congratulate our son-in law Julian. Julian was awarded the top employee in  Western Australia in the company he works for. He was in the running for the Australia wide award and was recently wined and dined in Melbourne with the CEO and the other state winners. Julian won the top prize and has received a very generous travel voucher.

Congrats to son-law and happy birthday to Lucy :))

Love your Owls..well all you have and are making , very busy ..

Now that's a delicious-looking cake Bev. Happy birthday to Lucy and congratulations to Julian - such a great reward. The owls etc are wonderful. I love machine embroidery.

I love all your sewing work. Looks like you are having fun with the embroidery hoop. Congratulations to your son in law. It is nice for him to be recognised for hard work.

you are so clever with your machine embroidery.. those owls are ultra cute.... Happy B;day Lucy... what a lovely cake and well done Julian.... enjoy your travels...
Hugz

Hi Bev, your sewing projects are lovely, cute little gingerbread man and the owls are gorgeous. Your son in law did well!

A wonderful creative week for you.

You have been busy Bev. Your owls are cute as is the gingerbread man. Your cross stitch is nearly finished and looking great
Happy birthday to Lucy and well done to you SIL..
Yummy choc cake.. Bet that didn't last long.

It has been busy at Kainga Happenings! Those owls are very cute Bev. Happy birthday to Lucy and congratulations to Julian.

Cute owls! I really adore that gingerbread man, one of my favorites for the holidays. Love seeing all your fun sewing and baking adventures.

Love all your little projects. Happy Birthday to Lucy. Your cake look yummy. A big congratulations to Julian.
Have a great day Bev and thanks for your visit too.

Happy birthday to Lucy! Did she get some nice comfy knickers? Congratulations to Julian, a great feat. Love the little gingerbread man - too cute!

Lounging with a Latte said...

Some cute projects there and I could do with a slice of that chocolate cake right now with my cuppa!!

I love those little owls! So charming....and your other projects are wonderful, as always.

It sounds like you have some family members to be very proud of, and Happy Birthday to Lucy!

You are really giving your embroidery machine a good workout!
All your projects look great.
Happy Birthday to your daughter and big congrats to your SIL. That is a great achievement!

Queen Of The Armchair aka Dzintra Stitcheries said...

Hi Bev...now JoJo and I are the proud owners of 2of these cute little owl mug mats...thank you so much! I know my one will get a good workout in my sewing room LOL and JoJo's will be on a table near her beloved drums!

Happy Birthday to Lucy and how wonderful to celebrate it for 3 days....woohoo!

All of your projects are great, but those owls are just adorable!!

Hello Bev ,.. just playing Catch up with my blog posts. I adore all your makes this post, especially the owl mug mats. Your x-stitch is looking gorgeous too - gosh you are clever. That cake looks like i could just reach into the screen & slice a piece :-) Happy week Bev, Julie x0x

Eggs In My Pocket said...

Congrats to Julian and happy birthday Lucy! They grow up too fast! What a wonderful looking cake. The owls and the gingerbread man are so cute........but I have to say I love those needle holders! The cross stitch design is looking wonderful!