"Friday With Friends and a fire and a rabbit."

On Friday I  joined in Friday Night with Friends, though I sewed during the day. This monthly event is hosted by Cheryll at Stitching Cubbyhole. Thanks so much for hosting this event Cheryll.
It had been so hot earlier on in the week I decided some snow needed to be involved with the sewing. 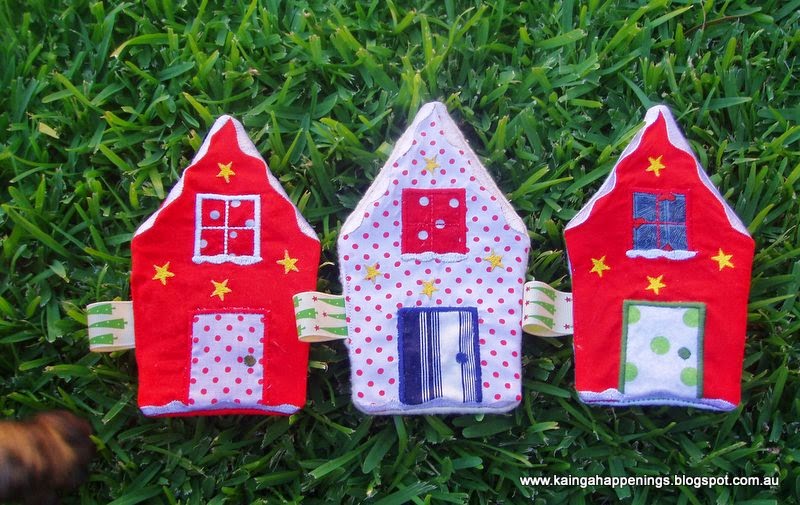 So in the morning I machine embroidered these little houses. These are all done in the hoop of the machine and stitched out in just over 20 minutes for each house. The one in the middle I made a small boo-boo on it, I put the backing and wadding the wrong way around so the wadding is at the back This is Ok because it makes it a very snow covered house. Two of them will be put in with the Christmas decorations and the one on the right I will use as a mug mat. I used some of the spotted felt that is on the door for the backing so this will make it a bit heatproof. This house designs is a freebie from a blog called Stickbaer 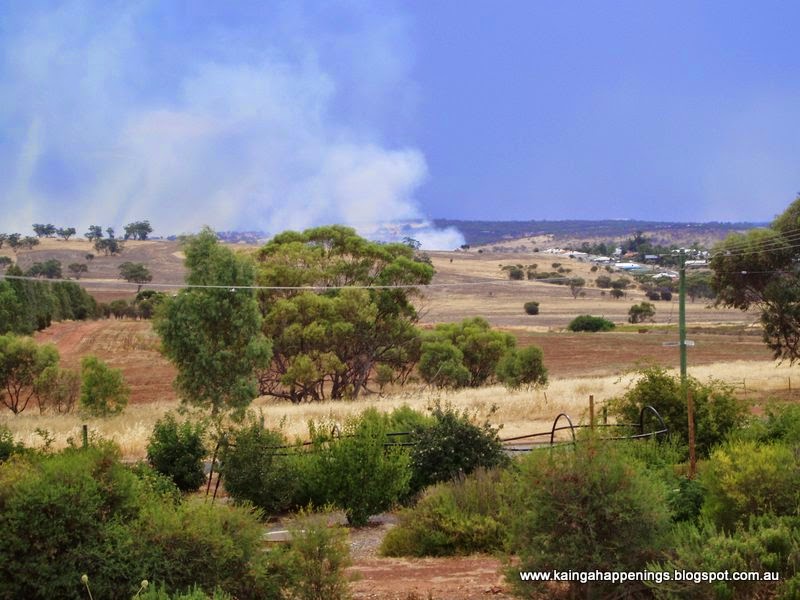 I did say it was hot earlier on in the week, we had a couple of days of temps that were 44 and 45, on one of these days I opened up the blinds and curtains to see what was going on outside. A fire had just started over the next hill. It must have just started because we couldn't smell the smoke first. We waited and looked to see if anyone else had seen it. We soon heard the fire brigade attending. There was lots of lightening at the time and it was probably caused by this. Later on there was a bigger fire further out of town. 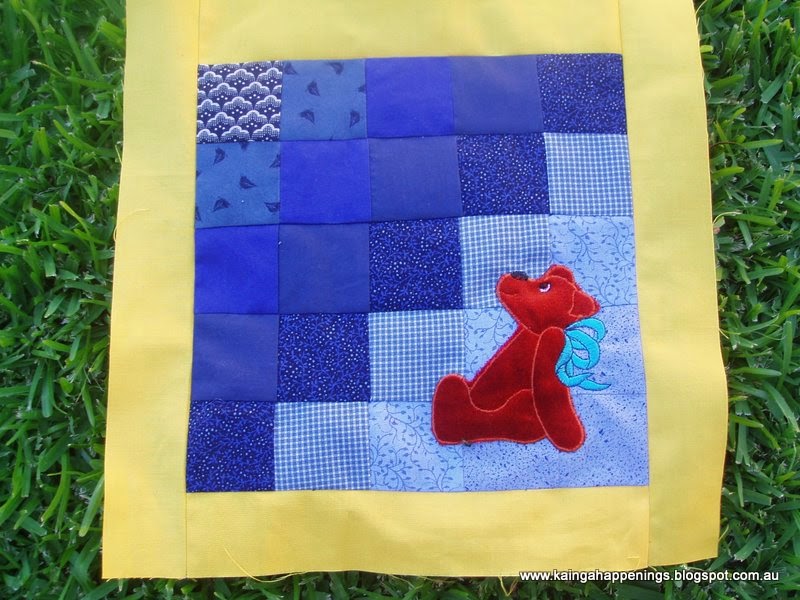 Friday afternoon I started this little mini quilt. Using up scraps of blue and luckily I still had some scraps of velvet that I made my sewing chair cover with last year for the Teddy Bear. I still have another embroidery design to add to the quilt. 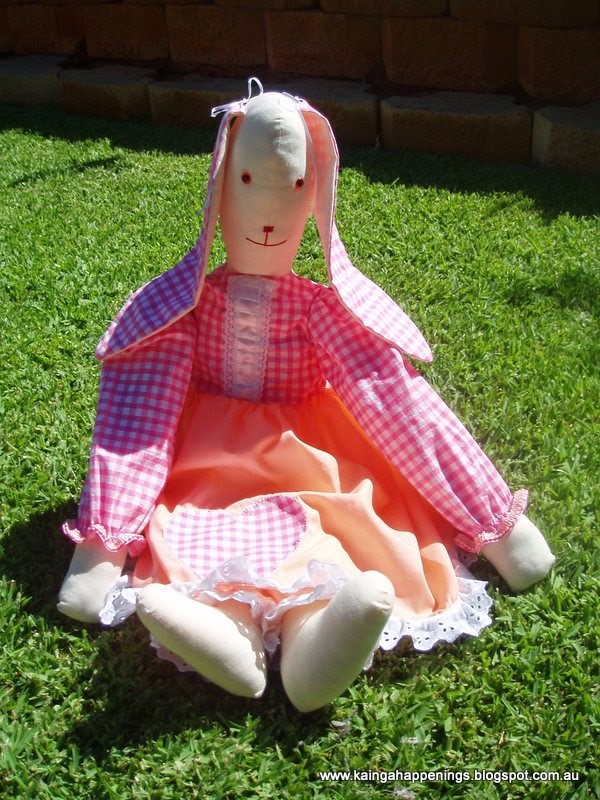 I did say in my previous post that I had a few very old UFOs to finish off. I have had this Bunny in one of my sewing drawers in several pieces. There was a set of arms and legs and a partially stuffed body and a set of ears. I had made a small start on the top part of the dress. I needed to un-stuff the body as I hadn't done anything about the face. I  purchased a set of eyes and stitched the nose and mouth. Bunny was eventually finished with a lovely set of clothes including some rather lacy pantaloons. Don't you love that word Pantaloons. Can you imagine wearing them today under your dress. Bunny is quite big at 33 inches tall. Now I will have to find a new owner for Bunny as I don't really want her now! I am glad she is finished though.

Enjoy the rest of the weekend.

so cute :) love your bunny!

I'd take your bunny off you in a shot! Love her to bits. You've been very busy with lots of different projects on the go :) Barb.

Cute little houses and Miss Bunny is adorable. Glad you were out of harms way with that fire.

You were busy Bev! Love your little houses and the bear is so cute. Pantaloons is a great word and bunny looks very special in hers. How frightening it must be to get those fires nearby! Stay safe. xx

Hi Bev - lovely variety of things being made here - I hope the fire stays away from you, bit scary! - such a sweet bunny, I'm sure you'll find her & her Pantaloons a good home! (yes I do love that word too!)

Good Morning Bev,
You have been a busy in your sewing room. What wonderful project posting you did. Houses are popular at the moment, even in scrapbooking/cardmaking. A very sweet bunny and quilt block too. Love the little bear in the corner.
Thank goodness all is okay with you and the fire did not come your way.
Have a wonderful week.
Blessings,
Bobbie Lynn

Love your bunny and quilt :-)

It will be easy to find a new home for that cute bunny of yours....she is adorable. Yes indeedy, there is something rather pleasant about the word pantaloons. Those houses are cute as well. I hope cooler weather is heading your way soon, Bev....perhaps I could send you some!

Bunny's so cute as well as the little houses.
Stay safe out there.

Your bunny is gorgeous, Bev. The little houses are cute. Those fires are a worry. Take care. Hugs, Christine xx

Love the bunny. She is so cute. Cute houses & block. Hugs, xx

The houses will make lovely decorations. Bunny is a real cutie. It feels good to get UFOs finished, doesn't it?

Sorry to see you had fires near you, but so pleased they were dealt with quickly and you are okay.
The little houses are great decorations. And so good to see your bunny completed.

You are so productive! I wish I could get going on projects! The fires sound worrying - keep safe! Pantaloons is a good word! :-)

Those little houses are so cute. Bet they were fun to make. Love that bunny and the little plush bear is adorable too. Glad that fire was controlled before it became big threat. Stay safe....xxx

What a productive day you had Bev. Your bunny is gorgeous and I'm sure you will find someone to love her. I love your little houses too. There is no such thing as a boo-boo in stitching really - it just becomes unique to you! Your little teddy wall hanging is cute too. Hope the rest of your weekend went well and the fires did not come too close. Cheers, Tracy.

Cute sewing projects! Looks like you've been wonderfully productive lately. Those houses look like a fun project to work on. Stay cool these days!

such cute houses and your mini looks great too. The appliqued bear looks so sweet.
Great finish for miss bunny. Hope she finds a new home.

Oooh, love that bunny! And the little frosty houses are SO cute. I love that you can stitch those up so quickly.

Queen Of The Armchair aka Dzintra Stitcheries said...

I think we all need a bit of snow Bev...very warm here but nothing like your temps!