I made this bag in less than a hour this morning using up the two fat quarters I took out of the Tuesday's Treasures parcel.

It was very easy to make and the good thing is it fits a coffee/tea mug perfectly. You could make them up in Christmas colours and include a mug and some chocolates etc for a Secret Santa present. I found it best to press your fabric after each step as this kept the fabric in place. I found the instructions for this bag at the Brother Sewing Site.

Have a lovely weekend.

I have had a piece of tartan material in my stash for many years. It was from my ex neighbour who owned the local patchwork shop. I hadn't used this piece because it frayed easily.  I first over locked the edges that were fraying and then hemmed it up ready to machine embroider. 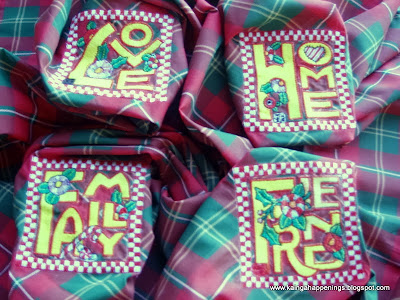 The table cloth is approximately 42 inches square with a Mary Engelbreit embroidery on each corner. I  chose designs though they are Christmas ones, it could be used at any time of the year as you tend to read the words then look at the pictures. Each of the designs each took just over an hour to stitch.  It took up 5 hours of my time with the sewing, cutting threads, getting the stabiliser ready etc this is why I have decided to call it a family heirloom even though it is less than 24 hours old!

I am linking up this post with Anthea's Christmas through the year link up.

"Heartbeat" Quilt and a Weekend away.

Hello,Today is the last day of September,can't believe how fast the year is going. Over the last couple of weeks I have been working on a quilt top. Doing about 15 minutes at a time. It has been one of those quilts you have to pin and pin and pin. Who said jelly rolls make quick quilts? 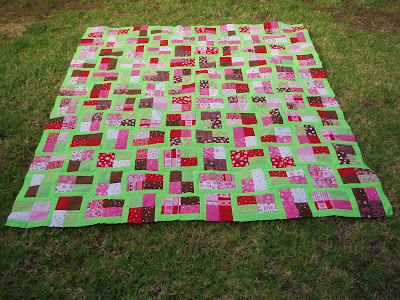 There is still a small border to go on yet. The pattern came from one of the Jelly Roll quilt books which I borrowed from the local library. I used the Jelly Roll I had won earlier on in the year for OPAM (One Project a Month)  The lime green is from the one I got at Good Sammy's. I think there is only scraps/strips of it left now.The big plan is to have it finished by the end of the year. I am thinking about hand quilting it. Though  those plans could change.

The above is taken from my blog posting on September 30th 2011.

Well, I didn't quite get it done when I said I would but I did hand quilt it.I started the hand quilting on Wednesday 16th October and finished on Wednesday 13th November, putting on the binding over two days finishing up Friday afternoon 15th November 2013. 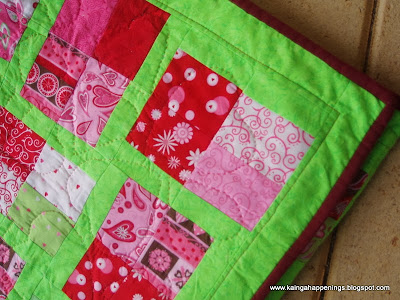 I ended up using the machine to quilt the border, so quick on the machine compared to hand quilting. I used some more of the lime green for the border and some brown homespun for the binding. Pink fabric for the backing completes this quilt.
I did find a wonderful fuss free method for joining the binding. I usually join on the bias but found a much simper method than what I was using. It worked the first time which was great. Thanks to Edna I will be using this method from now on.

The other event that took place last week was my Birthday. With family once again in every direction, several different lunches/dinners were on the cards.  Lucy made this wonderful double sponge filled with the most delicious strawberries between the layers and a very enjoyable icing made with cream cheese. Thanks so much Lucy. I was also taken away for the weekend to a surprise destination. 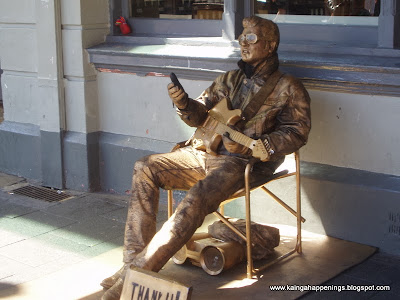 I got to meet Elvis. 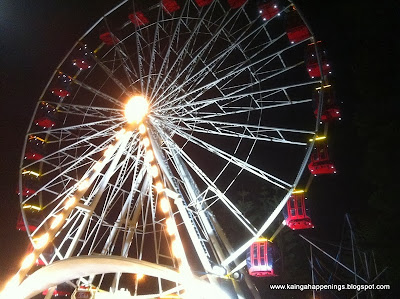 Marvel at the Ferris Wheel, we just looked at this, our tummy's were far to full to ride on here after our dinner on Saturday night. 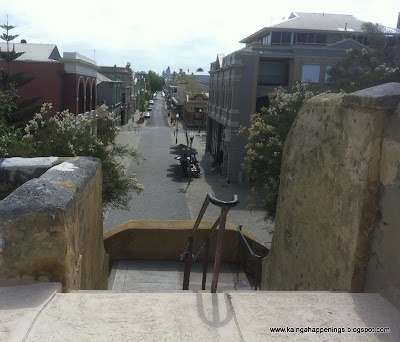 Lots of lovely old building to look at, here is the view of the streets of Fremantle from the Round House. 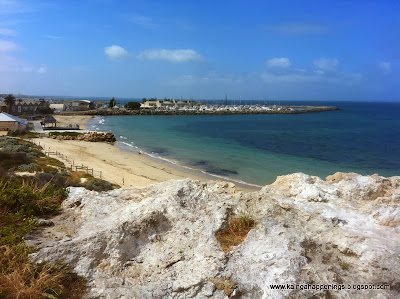 We got to see the ocean and feel the Fremantle Doctor which is the name of the wonderful breeze that comes in each afternoon. Something that living in the country doesn't provide. We did loads of walking which was great and on the way home called into the cinema's and watched "Enough Said" A great movie to finish of the weekend. Thanks Ian and family for a wonderful week of celebration.

David continues to supply us with some amazing medical facts. Did you know that for every extra kilo you are overweight your body needs to make one kilometre more of capillaries. Makes you think how amazing the body is and what some people are doing to their bodies.

I have had a bit of fun in the sewing room over the past week or so.

Now apparently Bah Humbug means you don't like Christmas the saying comes the fictional character Ebinizer Scrooge in the Charles Dickens novel "A Christmas Carol"  No one likes doing dishes at Christmas so I thought I would have some fun choosing the Christmas fabric and then the ladybug fabric for the words bug. I had digitized these letters which are "Copperplate" style a few years ago. 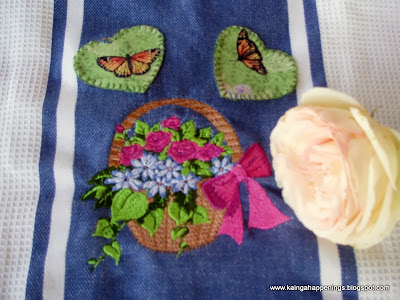 The tea towels came in a pack of two so the other one got a basket of flowers on it. This design is on my machine. I then added some butterfly hearts.


I still have all my sewing patterns from when our children were small. They are now being used for the next generation. This is a handy little pattern as it has cross over straps, which if they are a bit long you can just cross over the straps again to make the outfit fit better. I remember doing this with my girls. I did have a HUGE amount of trouble getting two button holes the same. I had practiced on some scraps,  all OK did the first one so well. Then the next one played up. (several times.) I gave up and added good old Velcro. This is why there are two buttons at the top to cover up the buttonholes. I couldn't be bothered un -picking the good one.

I must mention here that Sally was a great help in providing some elastic measurements for this project. Thanks Sally.

I had just enough fabric to make this little romper suit, I did have to have a join in the back lining but that doesn't really matter. What fun I had with this pattern. I had the pattern and no instructions. The thing that flawed me for a while was how the bottom flap section all joined up. I managed to work it out after a lot of pinning.

It was great fun working on little people's outfits. I could get used to sewing them again

Hope everyone is getting lots of sewing done, it has been the perfect weather for it, not too hot or cold.