I love tennis and each year I look forward to the Australian Open Tennis on television. I had to do a little patriotic stitching whilst yelling at the TV. No wonder the umpires are saying "Quiet Please." Who can watch a match without giving a bit of verbal advice to the players. I finished the cross stitch the day after the men's final. Too excited to stitch much while watching that match. I chose a pattern that is available from the freebie section at Artecy Cross Stitch. They put up different freebies on a fortnightly  basis. 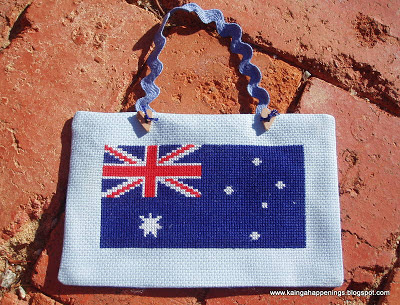 I decided to turn this into a little hanger. I had planned to stuff it and turn it into a cushion but it just didn't look right. I am extremely happy with how this turned out and loved that it only required three different threads. Stitched on 14 Count light blue Aida cloth.

"Slipping this one in."

January has well and truly been all about getting those little projects done. I had a pillowslip cut out for quite a while but decided the white fabric was a little thin. So I decided to cut out another piece and quilt it together for the top. Of course I had to machine embroider some Pink roses on it. 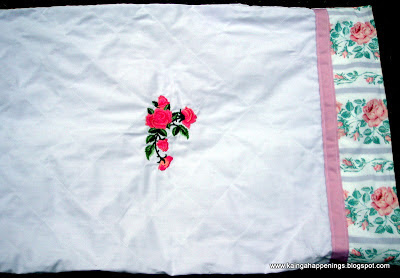 Which matches the fabric on the side panel.The pink ribbon actually had some writing on it but when you turn it over you can't see it. The good thing about this type of sewing it feels like you are making something for nothing which is a good feeling.

Have you made something for nothing lately?

Honestly who loves Housework. Gosh I even gave it capital letters,it must be  important. My Niece Jill announced her Engagement late last year. I made her a table runner. I also wanted to make something extra. 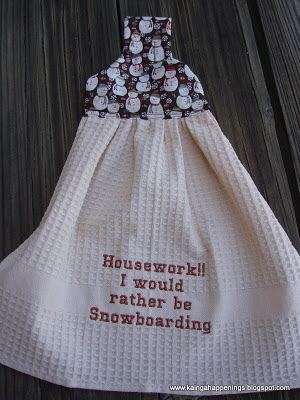 Jill and her Fiance Dave love the snow, so I thought this was a fun gift to give.
Happy days.
Bev C
Posted by Bev C at 6:00 AM 12 comments:

"I'd rather have flowers on my table than diamonds on my neck."

I love this quote.

I'd rather have flowers on my table than diamonds on my neck.  By Emma Goldman.

With this quote in mind I completed this table runner than just needed the quilting,binding and backing put on. Oh plus the machine embroidery. So I guess quite a lot really. 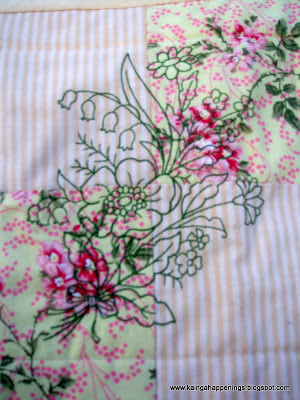 I machine embroidered two designs which were from a Brother Embroidery Card. 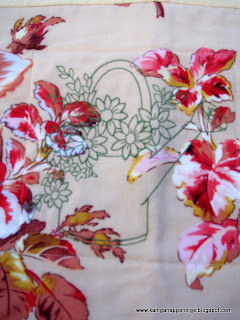 I could have done these as part of the quilting but wasn't too sure how it would work out, better to be safe and embroider them without the wadding and backing. I then stitched in the ditch around each block. I didn't worry about doing a border for this runner. I used some more of the dyed calico (brown onion skins) for the binding and backing. Another UFO completed. 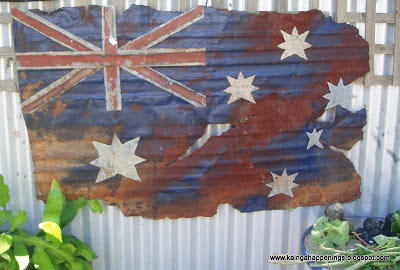 This  recycled Australian Flag is for sale at "The Alley" in Kellerberrin. A group run by the Activ Foundation which helps people with disabilities.

Australia the best place to live. We will be celebrating this long weekend.

A true blue Aussie Christmas Hexagon Runner and Thank you.

A few days before Christmas I stopped working on this hexagon runner that I was working on. I managed to finish it recently. This was a fun project to work on. I made up the design myself. I was so over seeing Snowmen etc for Christmas decorating. Christmas here at Kainga is hot, a Snowman has no chance of surviving. 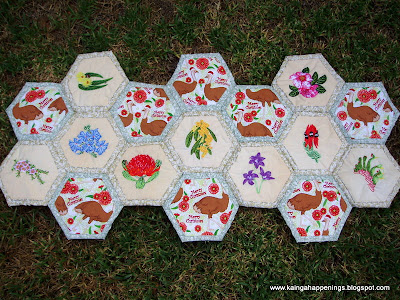 I purchased the Emu fabric from Spotlight and this was the basis for the runner. I machine embroidered the floral emblems of each state of Australia plus the Wattle which is the Australian floral emblem which is in the centre block. 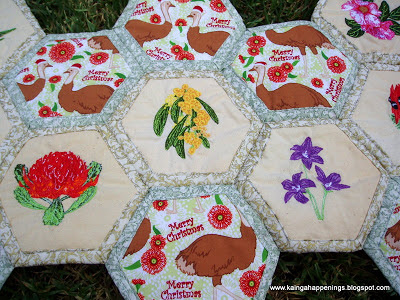 We would like to take this opportunity to thank everyone for their lovely comments regarding David. I can honestly say that this was the most traumatic time of our lives as a family. Unfortunately we have nothing good to say about The Bangkok Hospital in Samui. They botched up the operation. I believe we are so lucky to have such wonderful hospitals in Australia that treat patients with the correct procedures and most importantly treat people well.
We would like to thank the wonderful Surgeons, Nurses and staff at Royal Perth Hospital who treated David when he got back to Australia. David is recovering well. He has another month of soft foods and is certainly looking forward to when he can chew food.

Yesterday we received the phone call all parents dread. David had been in a traffic accident and sustained a broken  jaw and other injuries to his shoulder and face and one of his arms was in a sling. He is recovering from surgery. Luckily he had comprehensive travel insurance. His two travelling companions are OK and are staying in the room at the Bangkok Hospital with him until he is well enough to fly home.

So this means I will be taking a little break from Blogging and will answer emails from the previous posting later on.

Thank you for your understanding.

Has 2013 been good for you? I have made a start on some projects. I actually had a Post-it-note from March 2012 that said "Make two covers for folders." . Sometimes it is better not to rush things. Leaving it meant I made three of them 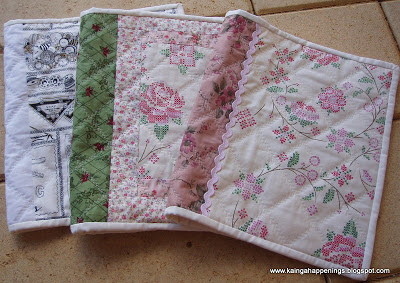 I couldn't find a pattern that fitted the A4 2 ring binders I had so I got out some newspaper and made up a template. The funny thing is if I had made these back in March I wouldn't have used these materials. As I received them later on in the year. The two folders with rose cross stitch material will be used for storing the cross stitch patterns I have downloaded. 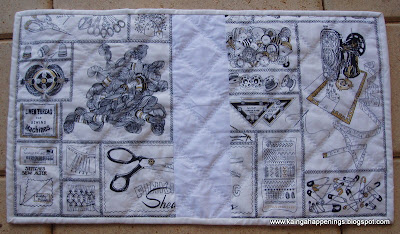 Chris sent me several metres of this lovely fabric, so this one will hold sewing patterns.I worked out that the main piece of fabric which covers the front and back of the folder has to be 23.25 inches  wide by 13.25 inches long. Make this a little bigger and cut to size after quilting the three layers together. I used a "Ladder Stitch" on each of the folders. 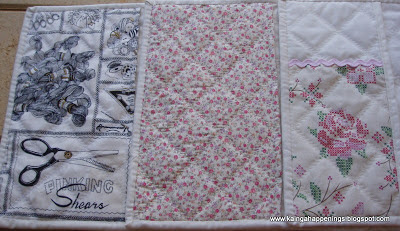 The inside flaps were all done in different sizes according to the amount of fabric I had. The one on the right has a binding where as the others were placed with fabrics right sides together on top of the wadding and the lining fabric was turned over then the pieces was quilted.

I have noticed that some bloggers have a word that goes with them throughout the year. This year I decided to have one too. I chose "Gradually" Mainly because that is how I want to take things this year. I keep on remembering that quote "Fools rush in where as Angels fear to tread" Otherwise I am not going to be signing up for loads of Blocks of the month and end up at the end of the year with a pile of half pieced quilts. I would rather have a few less made items than a heap of unfinished items.

Tomorrow I will be joining in doing some work on a project. Have you signed up yet?